The Lost Art of the Roller Skating Opening Sequence

I’m surprised that more movies today don’t open with a roller skating sequence.  It adds a certain “Wow factor” to the movie that can’t be replicated with CGI (Computer Generated Imagery) or even amazing acting.  Roller skates do two things for the film:  First, it establishes your protagonist as a free spirit; Second, you can have them introduce their environment as they tool around the area on a pair of skates.  Imagine how much cooler Taxi Driver would have been if Travis Barker stalked Cybil on a pair of roller skates.  I know.  That’s what I’m talking about.

Can’t Stop the Music was a theatrical vehicle to promote the Village People but the most memorable thing about the movie was Steve Guttenberg rollerskating through the streets of New York City.  Right off the bat they hit you with the tri-screen.   It’s like they had too much great footage and not enough time to squeeze it all it.   IMDB.com has an estimated budget for this movie of $20 million.  I’m calling bullshit on that unless that includes $18 million for the cocaine that the cast and crew were using while making this movie.

Roller Boogie has a continuous opening tracking shot that rivals A Touch of Evil.  It starts on Bobby looking out a second story window and checking if it’s skating weather – from the look of it any weather is roller skating weather.  It then pans down to his friend and 20 seconds later Bobby comes out from the door.  I have no idea how he got down a flight of stairs in roller skates and I never will.  After hand slaps it’s skating time and Bobby does some high elbow double arm pump move that is a thing of beauty.  Don’t forget this is all done to Cher’s song, “Hell on Wheels”.

There are two mysteries setup in the opening scene but never explained in the movie.  It’s worse than what happened in Pine Barrens on “The Sopranos.”

The first question is who is the lady talking to on the pay phone?  The guy had to drag her away to join the rolling Solid Gold Dancers that skated by.  Was she having a job interview?  Talking to her dying grandmother?  Reporting a murder?  The amount of time spent lingering on the swing receiver tells me something was going down.

The other is why is there a couple making out on a trash dumpster – with roller skates on?  The beach is 5 feet away and probably doesn’t smell like hot garbage.  Unless they have some kind of weird fetish.

Even though Xanadu‘s opening sequence is dancing and not skating, Olivia Newton-John does pop up at the end on skates for about 30 seconds.  She has a yellow glow that makes her look like a TRON light cycle and if you were wondering – we do fight for the users. 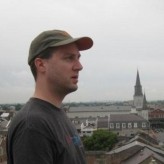