A Festival of Movie Lights – Written by Mayim Bialik

I know you think we’re everywhere.  You know, the JEWS.  The Children of Israel.  The Hebrews, as some of you may call us.  We run the media.  We are up in everyone’s business.  We own Hollywood, right?  Well, if so, tell me this my friends: where, oh where, are the Chanukah movies?

I know, I know.  There are a few; chock-full of stereotypes and crass Jewish humor, I might add.  Well you know what?  It’s lame.  It’s hard.  And I want to talk about it.

As a child growing up in Los Angeles, there were plenty of Jews in my life, but I knew that as a Jew, I was different than the majority of my public school – and the country (Jews are about 2% of the US population).  That being said, as a kid, I didn’t want to celebrate Christmas at all.  I did, however, love to adoringly watch all of the animated cartoon movies on TV.  I loved the vintage Rudolph the Red-Nosed Reindeer and Frosty the Snowman, and I also loved A Charlie Brown Christmas Special.  I watched these Christmas movies on TV in the same way I loved to gaze into department store windows from Thanksgiving through New Year’s.  I’d wonder, “What is this other world I am not a part of?  Why does the sight of fake snow, beaming gentile mannequins and elf statues make me feel some sense of longing?”

Speaking of elves, the only Christmas feature film I have ever seen besides It’s a Wonderful Life (which is awesome) is Elf.  I loved it because it poked fun at the Christmas myth; at the hysteria; at the madness that Christmas infuses into our lives every year.  It also had a feel-good message, Zooey Deschanel, and the impossibly perfect Will Ferrell.  I think I did pretty well to pick that movie as the only Christmas movie I have ever seen.  It’s hard to top so I may not try.

I know deep in my Jewish heart that I don’t want to celebrate Christmas; never have, and probably never will.  But I guess I might like to feel that Chanukah is – even for 90 minutes – worthy of a movie that could capture the complexity, the struggles, the comedy, and the family dynamics of the Festival of Lights.

For example, did you know that in my family there is a heated debate about whether latkes ought to be grated or mashed?  It’s intense. Put that in a movie, people.

Another example: Some families do 8 nights of presents, but I grew up with only one night of presents and 7 days thereafter of pencils, chocolate gelt, and maybe a light-up dreydl.  That stung.  Put that in a movie.

How about this?  I hate shopping and I also dislike crowds.  I am ecstatic to not be a part of Black Friday and it makes me feel smug and self-righteous: PUT THAT IN A MOVIE.

Think about the children, oh producers and writers of Hollywood.  Think of my sweet boys, being raised in a world that does not speak to them in the language of cinema for the months of November and December.  Imagine the possibilities if there was such a movie!  Name a Jewish celebrity, any Jewish celebrity.  I’ll help you: Natalie Portman.  Andy Samberg.  Adam Sandler.  Gwyneth Paltrow (Gwyneth is Jewish!)  We could have the awesomest movie ever if we cast all of the famous Jews in it.  We don’t even have to call it a Chanukah movie.  We don’t even have to mention Chanukah.  Heck, maybe they could all play Christmas-celebrating Gentiles!  They’re actors, it’s all good!

Just release this movie of my dreams around Chanukah.  We Jews will send out signals through our secret channels of show business (through the manholes beneath your cities, and through silent codes communicated through glances in supermarkets) and we will all know it’s a Chanukah movie even if you don’t call it that.  In public, we will simply marvel at the talent, the strong features, the bold plotlines…knowing full well it’s our Chanukah movie.

And in private, I can sit my boys down in a movie theater during the 8 nights of our holiday, and I can say, “Boys – THIS is your Chanukah movie.”  And when they ask why it’s not about Chanukah, I will respond quite simply with, “It is, boys.  It is.  In a very 2% kind of way.” Mayim Bialik is best known for her portrayal of Blossom in the 1990s sitcom and of Amy Farrah Fowler on The Big Bang Theory.  Bialik writes regularly for Kveller.com and has a book on parenting, Beyond the Sling: A Real-Life Guide to Raising Confident, Loving Children the Attachment Parenting Way. 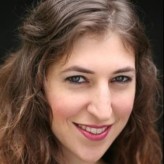