Gagging on Velvet with Candy-Colored Clowns: Why Bobby Vinton & Roy Orbison are the Scariest Singers in Rock ‘n’ Roll

There’s only been a handful of times in my life that I’ve found musicians scary, and these were mostly due to the terrifying images on various album covers I’d seen as a kid.

For example, when I first encountered Gene Simmons’ glowering, painted face on the KISS album Dynasty, I was mortified.  He looked absolutely demonic and his intense, sloe-eyed glare seemed to bore right through my young skull.  Likewise, the slimy, gelatinous blood oozing out from Ozzy Osbourne’s  razor-sharp fangs on the cover of Speak of the Devil disturbed me to no end (and still does, actually, if only because the stuff looks like it was scraped off a dirty floor in the Smucker’s factory before getting squirted into his mouth).  Never mind that the music on these two albums is benign by today’s standards; the ghastly pictures on their covers wielded a horrifying power over me, especially when I was an impressionable little boy. See what I mean?  Scary.

As I’ve grown older, however, the visceral jolt I used to get from Heavy Metal iconography has gone away, and I’m happy to report that I no longer suffer from the panic-induced paralysis that Simmons and Osbourne used to give me whenever I’d see their records.  Unfortunately, there’s two performers I heard in my formative years who still give me the jitters, no matter how much I think I’ve outgrown such childish fears.  Who are these evil performers who’ve retained their ability to cripple me with anxiety, even in my adult years?  Bobby Vinton and Roy Orbison.

That’s right, you read those names correctly.  Vinton and Orbison terrify me.  I squeal like a stuck pig whenever they’re playing.

To be clear, it’s their distinctive singing that fills my heart with dread, not their faces. (In fact, Vinton was actually a handsome lad back in the day, and while the same can’t be said of Orbison, his Boris-Karloff-meets-Johnny-Cash-meets-Elwood-Blues style isn’t so much scary as it’s creepy.)  So, how did this happen?  How did two of the most wholesome and innocuous voices of the 20th Century become my personal harbingers of doom? The Polish Prince and The Big O; scarier than Heavy Metal.

I’ll tell you how: David Lynch.

Yep, thanks to David Lynch and his seminal film, Blue Velvet, the sounds of Vinton and Orbison make me uneasy.  Whenever their music plays, I become nauseous and frazzled.  I count the number of people in the room and become acutely aware of the locations of all the exits.  And of course David Lynch would have to be the perpetrator of their devilish transformation—only Lynch is perverse enough to take two of their most endearing and plaintive ballads and wring a virtual galaxy of unconsidered subtexts and unsettling emotions out of them.

From the very beginning of Blue Velvet, Lynch deftly employs Bobby Vinton to do his bidding; his voice and lush arrangements add layers of complexity to the establishing shots.  Lynch’s choice to use Vinton here allows him to hint at the dichotomous nature of the film’s setting.  Lumberton is a quaint little town, a place where goodness shines in the sun… but evil reigns after dark.

During the opening sequence, Vinton’s “Blue Velvet” plays over dreamy, soft-focus images of Lumberton’s sunny suburbia, replete with white picket-fences, well-manicured lawns, colorful flower beds and friendly, smiling firemen.  Everything here seems charming, clean and safe.  Everybody knows everybody else.  It’s the type of place you’d want to raise your children, grow old and retire.  The kind of town where you’d join the Rotary Club or volunteer for church activities, even if you weren’t particularly religious.  In fact, the marriage of “Velvet” and Lumberton’s daylight beauty are simpatico because Lynch saw these things while listening to the song. “It was the song that sparked the movie…  There was something mysterious about it.  It made me think about things.  And the first things I thought about were lawns– lawns and the neighborhood.”  ~ David Lynch

Just as the mood begins to settle into beatific serenity and quiet suburban ecstasy, disaster strikes.  A man watering his lawn has a stroke and violently collapses.  As he keels over, fighting for his life, the music of “Velvet” recedes, and we’re shown Bosch-like images of the hideous insects who toil in an unseen world under the grass.

The song, made popular by Vinton in 1963, seems like an anachronistic choice for a film that transpires in 1986, but that’s precisely the point—by using Vinton’s hit, Lynch evokes a different time in America, one that’s wistfully viewed by nostalgic Baby-Boomers as an age of innocence, which is exactly what Lumberton’s like… on the surface.

The very same smooth and silky ballad also serves to give an ominous and hard-boiled feeling to the town at night, when its seedy underbelly comes to life and upstanding, law-abiding citizens are fast asleep.  “Velvet” transforms into the type of song you’d expect to hear in a film noir; a schmaltzy theme with a saccharine melody that gives the cynical, amoral creatures of the night an ironic tinge, making their fast lifestyles and shadowy activities seem romantic.

“Velvet,” along with Roy Orbison’s “In Dreams,” is used with even more dramatic effect by giving the audience chilling insights into the psyche of one of cinema’s most dark and sinister antagonists, Frank Booth (Dennis Hopper).  Booth is a sadistic psychopath; he’s a loose-cannon, a walking time-bomb who rules Lumberton’s criminal underworld with a heavy hand.  Booth’s intense and aggressive sexual urges are exacerbated by his inhalation of an unidentified gas that, when used, gives him a petulant rush.  When high, he turns into a giddy, impish menace. 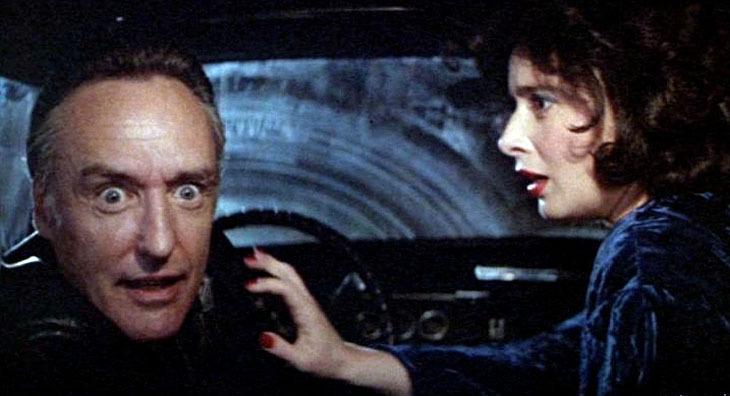 Sung from the perspective of someone remembering a lost love, the lyrics to “Blue Velvet” are imbued with a profound sense of melancholia.  This sense of loss and sadness is crucial to the nature of the relationship between Booth and Dorothy Vallens (Isabella Rosselinni), a nightclub singer blackmailed into serving as Booth’s sex-slave.  Desperately missing her son, who’s been kidnapped by Booth, Vallens feels compelled to perform the song onstage at the local watering hole, the Slow Club.  Sitting in the audience, Booth listens intently.  With tears edging his eyes, he’s on the verge of weeping. Enraptured and overwhelmed by Vallens’ seductive delivery and husky voice, Booth seems violently possessed by some horrible memory, one he relives whenever he hears Vinton’s melody.

At this point, the song assumes a literal meaning by becoming a tangible object in the film. While desperately clinging to every lyric of Vallens’ smoky phrasing, Booth clutches and strokes an actual piece of blue velvet, like a child stroking the silky material of their favorite blanket.  By petting the colorful fabric, Booth’s overtly fetishistic and obsessive nature is revealed: earlier, he clipped the material from Vallens’ robe while sexually assaulting her.  Smacking Vallens across the face, Booth dry-humps her while demanding she gag him with the blue velvet of her robe—all while referring to himself as “Baby” and calling her “Mommy.”

Later, while visiting his criminal associate and accomplice, “Suave” Ben (Dean Stockwell), Booth adamantly insists that Ben perform the “candy-colored clown” for him.  Ben obliges, and a cassette of Roy Orbison’s “In Dreams” plays through a boom-box while the foppish and deviant criminal lip-synchs along with Orbison’s quivering, operatic vibrato.  Mesmerized, Booth watches Ben perform, listening to the song with the same emotional intensity and singular focus that gripped him in the nightclub.

“In Dreams” is very similar to “Blue Velvet” in that both songs share the perspective of someone who’s lost a significant source of love and affection.  The protagonist suffering in the Orbison song, however, is helped by the “Sandman,” a stealthy nighttime entity who soothes the singer, helping him to dream of the person who’s been left behind.  “Suave” Ben, a swishy dandy wearing ghoulish white make-up, personifies the “candy-colored clown” in Orbison’s ballad.  Singing into a mechanic’s light, Ben reassures the now-maudlin Booth that, despite his painful loss, “everything will be all right.”  Booth becomes so engrossed in Ben’s performance he’s once again on the verge of crying hysterically.

When the perspective of the lyrics shift, however, changing from a description of the Sandman to addressing the singer’s lost object-of-desire directly (“In dreams, I walk with you/ In dreams, I talk with you”), Booth abruptly stops the song before losing control.

It’s clear he’s experienced a debilitating and devastating loss, one that still causes him immeasurable pain.  It also supplies him with a fiendish desire to lash-out on others with his volcanic rage.  The hurt that’s driven Booth to evil has clearly not abated, nor will it—as long as he keeps using drugs and violence to avoid dealing with the pain, he will always subjugate others with a displaced animosity and murderous abuse.  He’s destined to create suffering wherever he goes.

The second time we hear “In Dreams,” Booth and his gang have driven Jeffery Beaumont (Kyle MachLachlan) out to a lumber yard in the middle of the night.  As Orbison’s voice plays through the car-stereo, a hefty floozy dances listlessly on the roof of the car while Booth and his henchmen prepare to savagely pummel the helpless Beaumont.  Here, Booth’s relationship to the bittersweet ballad changes.  Consumed by a bottomless hatred and a fiery enmity, Booth no longer needs the reassurance of Ben’s “Sandman.”

Smearing red lipstick all over his mouth and cheeks, Booth transforms into a deadly and grotesque version of the “candy-colored clown”—a shady, unpredictable figure who tip-toes through Lumberton at night, sprinkling drugs and violence on lost, afflicted souls.  Booth’s driven to do this; he clearly needs to make everything the way Orbison promises it will be: “all right.”

Perhaps Booth’s fixation with these songs stem from an association with horrible events from his childhood.  The Mommy-and-Baby role-play during his assault on Vallens suggests Booth may have tragically lost his mother at a young and tender age.  Perhaps his obsession stems from the ability to tenuously reconnect with her, via Vinton’s and Orbison’s songs… and his many despicable perversions.

Vinton’s “Blue Velvet” and Orbison’s “In Dreams” were both released in 1963, just a few months before Kennedy’s assassination—a catastrophic event that’s believed to have truly stolen America’s innocence.  Maybe a young Frank Booth, heartbroken and struggling to understand the nature of cruelty, had his purity tainted too, and, like the rest of the nation, grieved while hearing these songs on the radio.

For Booth, however, Vinton and Orbison’s music served as a soundtrack for his descent into madness, and continue to keep him moving down a terrible, hellish road. 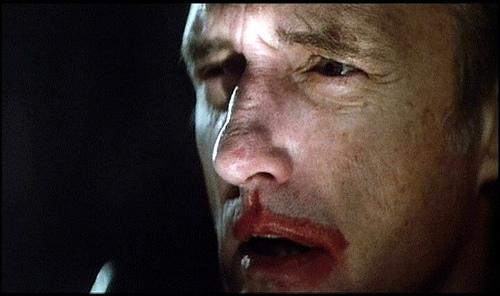 So, go ahead: talk to me about the chilling theatrics of early Alice Cooper or Marilyn Manson all you want.  Argue that shock-inducing bands like Slipknot, GWAR and Cradle of Filth, with their macabre and gruesome live performances, are the living embodiment of classic horror films.  You can even suggest that Robin Thicke and Miley Cyrus are insidious, pansexual demons, using Auto-Tune and Marvin Gaye samples to turn our culture into a modern-day Sodom and Gomorrah.  It doesn’t matter.  Thanks to David Lynch, none of these musicians will ever be as scary as those two horrible and wretched monsters, Bobby Vinton and Roy Orbison.

My condolences to Gene Simmons and Ozzy Osbourne… 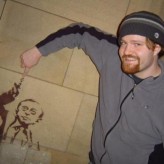