What My Six Year Old Daughter Thought of Muppets Most Wanted

I thought I was going to be the coolest dad in my daughter’s eyes when I surprised her by taking her to see a press screening for Muppets Most Wanted.  The last time I did this was for Frozen.  That’s right, Frozen is the movie that EVERYONE loved. She still reminds me about how happy that made her that she got to see it before everyone in her class.  So when I had the opportunity to take her to see Muppets Most Wanted, well, getting daddy points for this would be like shooting fish in a barrel.  So what could go wrong?
The movie started and all was good in our world.  Fifteen minutes into the movie, she cuddled up next to me.  I thought, “These are the moments I love being a dad.  She’s so happy she’s seeing this that she wants to snuggle.”  I have to admit that getting up all night with my 4 month old and waking up at 5:30 am with our two year old had started to wear on me. The dark theater and a warm 7 year old on my lap was too much for my exhausted mind to resist, I was sleeping on and off thorough the movie. I assumed this movie was going to follow the happy Muppet morality formula as the last movie in the franchise.  I was wrong about that…so very wrong.
The movie ended and it was time to leave.  She was very quiet, but I just assumed it was due to the fact that it was late and a school night.  As we were driving home I figured now is as good as any time to have my ego boosted for being a great dad.
“Sooooo, how’d you like the movie?”
There was a pause and then she responded with, “I liked it a little bit.”

A little bit…a little bit?  But it’s the Muppets, it’s an early screening, it’s…not Frozen.  So I had to ask her “Why did you like it a little bit?”

“Constantine the Frog!  He was so evil.  Why did he send Kermit to jail?  Kermit didn’t do anything wrong and he still got sent to prison.  I don’t get it, people want to be thieves, but they don’t want to go to jail.”

I wasn’t prepared for her to not like the movie and I certainly wasn’t prepared to go into a deep discussion with a 6 year old about why the legal system is flawed.  She then referenced Constantine the Frog and Dominic Badguy setting out to steal the Crown Jewels, “Why can’t they just buy a plastic crown?  Seems like it would have been easier.”  Before I could respond she said,  “Where was the plot?  There were two themes and I didn’t like either of them.   At least in the The Muppets they were trying to save the theater and that meant something.”  I had no idea she knew what themes were, I guess her Charter school is doing it’s job.

I don’t know how her mind got to this thought, maybe her adorable little girl Hulk rage gave her temporary dementia or maybe she was hungry, but this is what she told me, “There was a time a while ago, a lady was at McDonald’s and she said in a mad, sassy voice, ‘I just want my nuggets’ but they wouldn’t give her the nuggets and she got mad and then the police arrested her.” Long pause,

I had no idea what she was talking about – there was a Rio 2 coming out?  All joking aside I just realized that this surprise had  backfired on me.  She wasn’t cuddling with me earlier to be cute, she was doing it because she was terrified.  She was clinging  to me so I could protect her from Constantine the Frog  when he realizes that he can come through the screen.

I still didn’t believe that she didn’t like the movie, so I asked her again if she liked it and this time she replied, “No,”  so I continued to press her more about the movie because truth be told I had slept thought some of it, knowing I was in good hands with the kind loving Muppets.

“Would you rather do chores, or watch Muppets Most Wanted again?”

With no hesitation she replied, “Chores.”

“Would you rather eat a pile of Brussels sprouts or watch the movie again?”

She hates Brussels sprouts and she definitely is not a fan of chores.  For her to choose those over a two hour movie about talking puppets, well simply put, she hated it.

I thought that when we got home this would all be left behind, but it turns out I was wrong again.  After tucking her into bed and she reminded me how much she did not enjoy this movie, I wished her sweet dreams and told her that I’d see her in the morning.  Little did I know that free movie would cost so much…

For the rest of the night she woke up every hour on the hour terrified that Constantine the Frog was going to break into our home. Was Constantine subliminally telling her in the movie, “I’m coming for you tonight, so be prepared!”  Well if he had she was prepared because she continued to yell out to our sleeping family, ” Constantine’s coming for us, be ready!” It got to the point where I was ready to give her and myself a Benadryl cocktail. Finally, she went to sleep with her older brother. Her theory was Big Bro would  protect her or Constantine the Frog would get him first.  Either way, it worked.

Now I’m not saying that your kids won’t like this movie, but what I am saying is to be prepared to see what evil in the form of felt and catchy songs will do to a kid’s mind. If you aren’t a fan of sleep then by all means this is the movie for your eight and under kiddos.  We give Muppets Most Wanted two piles of brussels sprouts and three sleepless nights. 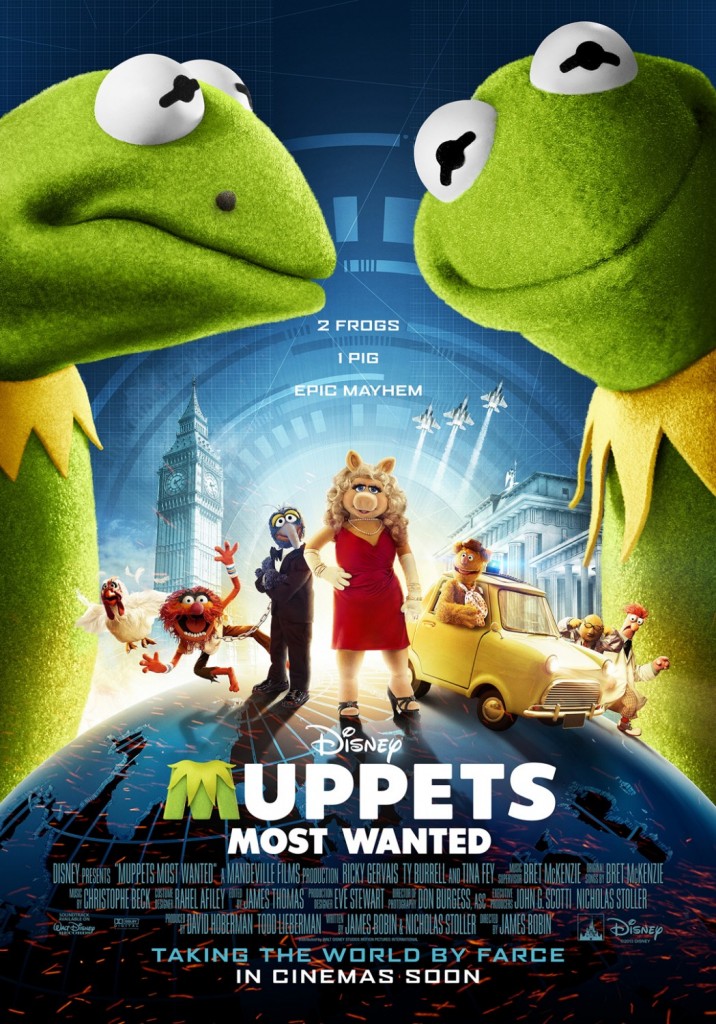 TMNT Poster. Will This Make Your Day?
Wes Anderson’s Centered